How do you actually learn how to take photographs?

»People who take photographs are always driven by the wish to create something intended to outlive the brief moment of exposure.«

I took my first photo as a five-year old in 1960. I photographed my grandfather in an allotment when the sun was high in the sky, which caused a pronounced shadow beneath the brim of his hat. When I was given the photo later on I was fascinated by the fact that I had my grandfather, whom I otherwise only ever saw in the holidays, with me in a picture at all times. From that moment the Agfa Isola 2, a simple 1950s medium-format camera, was my toy. I often opened the back of the camera, lay down on my back in the grass and held it far away from me towards the sun. When I pressed the shutter release a hole opened briefly and there was a flash of light. I could change the intensity of the light with two slides on the lens. With one of them you could set either the number 6.3 or 11, and with the other the numbers 100, 30 or the letter B. I always liked B best, because then the circular aperture remained opened for as long as I pressed. By trail and error I discovered that the one series of numbers had something to do with the time, and the other with the size of the aperture. With the setting on B I could even look through the lens from the back, provided that is that the camera was at a specific distance from my eyes. What really flummoxed me was that everything was now upside down. This is more or less the way I came to know what a camera is and out of sheer curiosity understand the shutter and exposure time.

Most important, however, was realizing that by means of photography I was able to make something permanent. Ten years later, (I now owned the camera), I took the Isola to my first rock festival in Germersheim. Curious to see what would happen, on the night Pink Floyd played their album »Atom Heart Mother« live for the penultimate time, I took all the photos with the camera on the B setting. As a result, through the hand-held long exposure all that emerged were colorful strips – in retrospect perhaps the only appropriate way to visually capture that night.

The Camera has no Brain

Even the most perfect algorithms for a camera’s programmed automatic exposure mode are nothing but infinite processes condensed by humans, which have been known since photography was invented, but on which we have only very limited influence. Though combined shutter and aperture priority delivers quick results, it means the photographer loses all sense of the relationship between light intensity, exposure time, and depth of focus. But if it has no automatic functions a camera only does exactly what you want it to – provided you know how it is constructed and how the different parts work together. The more exactly we can set the camera, the more perfect the results are.

I expect of students who decide in favor of photography as a means of design that alongside the technical workflow courses they also address photographic technique on their own. Anybody who only ever uses a camera for a specific set task does not have the right approach. Without constantly experiencing how a camera responds in very different circumstances you will never be able to work professionally. To do so you have to have the will to explore the camera and light without it resulting in a photograph.

In principle it should be possible to photograph any real and indeed any imaginary construction by orchestrating them.

Arousing curiosity is an important element in photographic work flows. Being surprised by how a camera works, astonished by how a silver image appears in a photo lab, or amazed by the effects that can be created with light in a photo studio are just three examples of how one can remain interested in photography for good. At the beginning of every Photography Workflow 1 course an analog Hasselblad camera is completely taken apart in order to show the students its mechanical features and how the components work together.

The idea behind this is for those who understand the technical workings of a camera as a means of production to be able to operate it as well, in order ultimately to be in a position to use, and reflect on how to use it in a wide range of creative contexts. However, when students are faced with the task, at the beginning of their first semester, of going off in small groups to take photos of themselves, it is also about emotions and feelings. Nobody knows beforehand whether everything will work. Was the film inserted properly? Was the exposure measured correctly? In a situation like this full of curiosity and uncertainty, students familiarize themselves not only with the camera, but also with the members of their group. Some of this always ends up permanently on film.

»If you are trapped between the screaming audience and the stage, your blood rushes directly to your camera’s shutter release. If you are good you will never escape. If you are bad the mechanism will seize, and no one will remember you«

The On Stage teaching unit was first introduced in the 2010 summer semester as a pilot project for the technically-oriented Photography Workflow courses 2 and 3. A scene in Michelangelo Antonioni’s classic »Blow Up«, in which Jeff Beck smashes his guitar in a London club, triggered the project, which has since been offered at intervals of two to three semesters. It was initially about intuitively learning camera settings and image compositions, as well as working at speed in a photographic process under extremely difficult conditions, because rock concerts deliver exactly that: quickly changing on-stage lighting and camera settings that have to be made in the dark. It is only possible to compose an image if you can anticipate the band members’ movements and those of the lighting. There is little leeway. Anyone who succeeds in having the rock & roll stage firmly in his control will be able to master other photographic situations with ease.

After the first few concerts students photographed, it quickly became clear that the course had to be about more than merely being in control of the camera. Indeed, it became clear that on the one hand the interpreters’ body language had to play a considerable role in the development of technical and creative strategies, as gestures, facial expressions, and habits are a deciding influence on visual reception, and on the other that the conditions need to be questioned under which nowadays photographs can be taken at all at concerts, as the stipulations imposed by groups’ managers and agencies are strict. As a rule, photographs can only be taken during the first three songs of a concert, which places enormous restrictions on the photographers, because good creative concert photos are only possible if the person taking them has enough time to differentiate between rehearsed poses and natural human movements. Spontaneity is, however, indispensable for this type of photo, as the light show, performance, the state of the band and the general sentiment among the audience can only rarely be anticipated. However, all these factors determine the leeway photographers have at a concert and force them into acclimatizing quickly to the mood and gauging when it is appropriate to take photographs, and when restraint is called for. The closer the photographer gets to the human being in the showman, the more intense the experience when viewing the image later on.

Alongside teaching the theoretical and technical fundamentals of digital photography and how to process it in Photoshop and Lightroom, the course aims to promote a sense of responsibility and develop team spirit in artistic training that is otherwise very much focused on the individual.

Yet what actually makes for a good rock photograph if a lack of focus, coarse grain, disharmony, blurring, bodies that extend beyond the image, and overexposure have long since become the standard repertoire of rock photography? Alongside technically perfect images, all these photographic errors are familiar as creative means not only here but in content-defined and image artistic photography as well.

When the film had been developed and Pennie Smith saw the photo that would later be used for the cover of »London Calling« by The Clash for the first time, she ascertained that it was out of focus and could not imagine it ever being used for the cover. Yet the band was adamant. They absolutely wanted it, as sharpness is always relative. Jerry Schatzberg had a similar experience. Having completed with Bob Dylan the photo session for the »Blonde On Blonde« cover using a medium-format camera, he went outside again with Dylan, with a 35 mm camera. He shot off an entire film, and with the exception of three, all the photos were sharp. Bob Dylan, however, decided in favor of one of the blurred photos and it was used for the very first cover to feature a photo on the front and back of an album without any additional text. 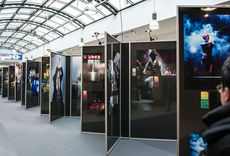 The exhibition »On Stage« is on display in Berlin’s Ostbahnhof from March 23 to April 2, 2015.