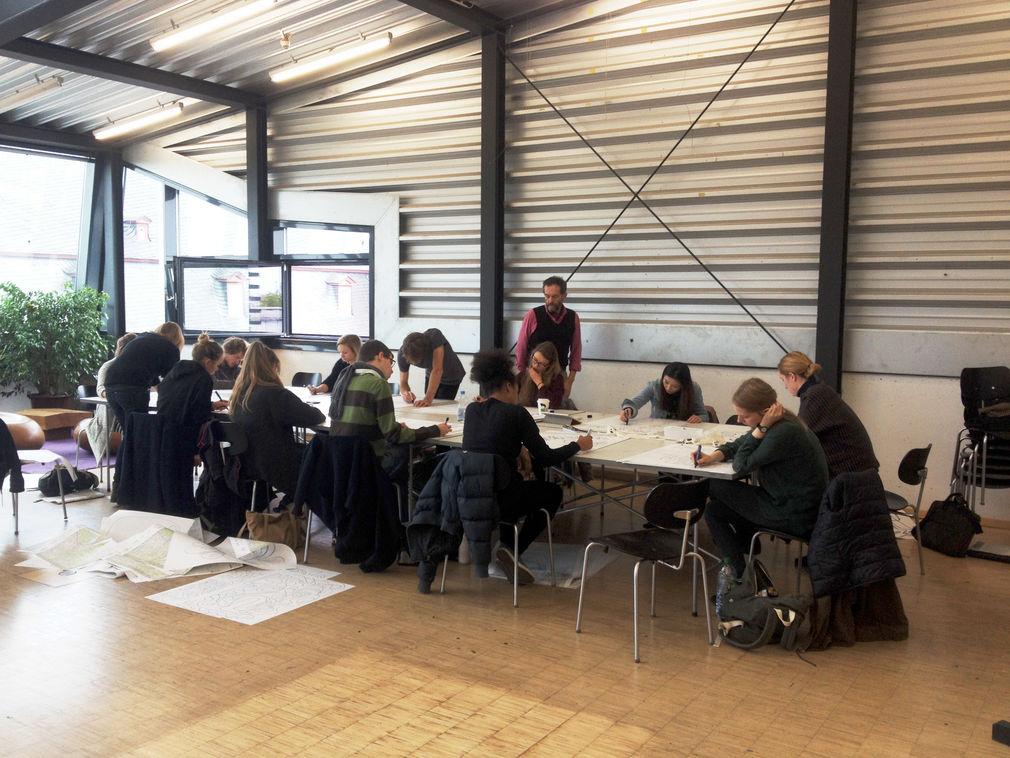 As the oldest form of pictorial thought, drawing plays a fundamental role in design. The subjects studied on the Conceptual Drawing course raise awareness in particular of economy of line. Alongside classic drawing by hand, electronic drawing boards are also used. By means of digital interfaces such as photography, scanners, and vector programs the physical poetry drawn is transformed into a pictorial language that can be reproduced exactly and produced using a wide range of cutting techniques (laser, cutting plotter, printer). 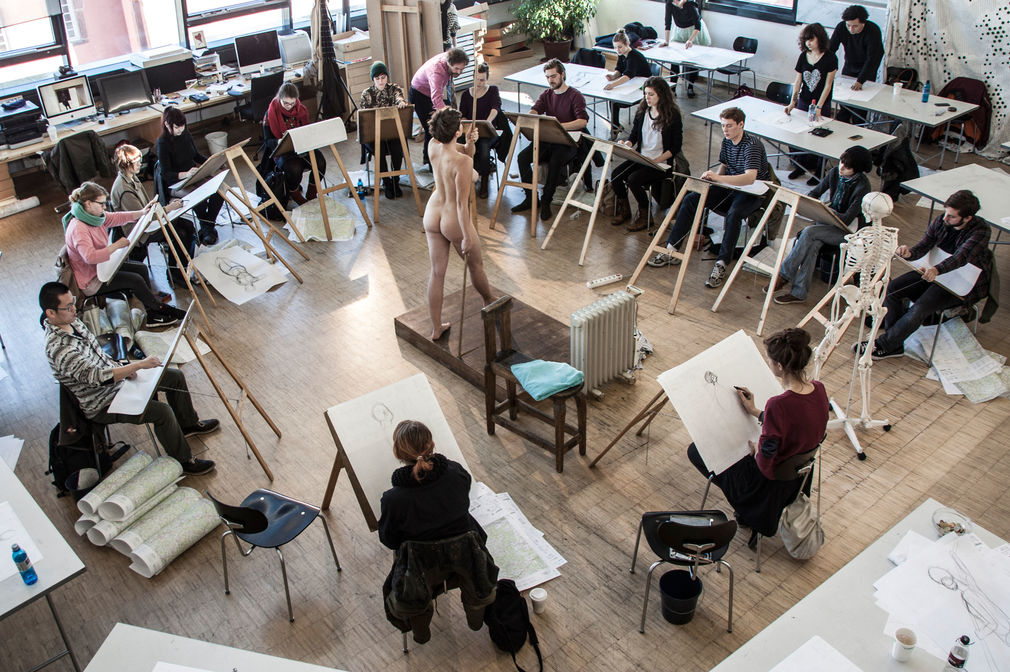 Drawing the human figure is now a firm part of the Basic Courses, and has proved its worth especially for novices. The ritual in the Life Drawing room, respect for the model, a clear layout and the uncomplicated working situation create a sense of security for this sensitive learning process. Circles and segments using moving lines are what are primarily drawn. The students can learn to draw the rest of the body intuitively but methodically, in the process learning about proportions through drawing. An intensive work process produces visible results. The weekly session is open to students of all semesters and departments. 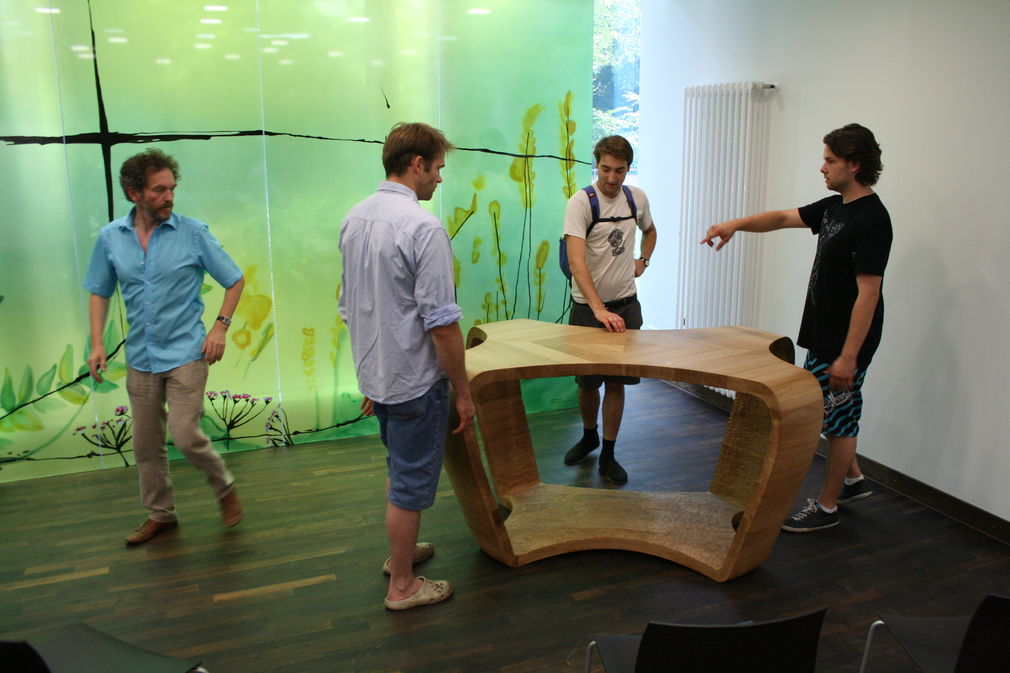 In collaboration with Offenbach Clinic, Theology students from St. Georgen Graduate School of Philosophy and Theology in Frankfurt, as well as the Catholic and Protestant Churches, the Prayer Room at the new municipal clinic in Offenbach was redesigned. From the concept stage to completion, more than 60 people spent more than two years working on the design.

They included a large stained-glass image, a sculpture of a dove on the ceiling and new designs for the altar and ambo / lectern.

From September 2012, an issue of D.O.R.T. magazine appeared regularly in semester breaks. The focus was on random works. There was to be no specific concept, but as many different works as possible united through color concept, simple navigation, and printing technique alone. Illustrators, graphic artists, and photographers availed themselves of the opportunity to present their works in this context and produce them together. By 2014 three issues of the magazine and several poster series had been printed. 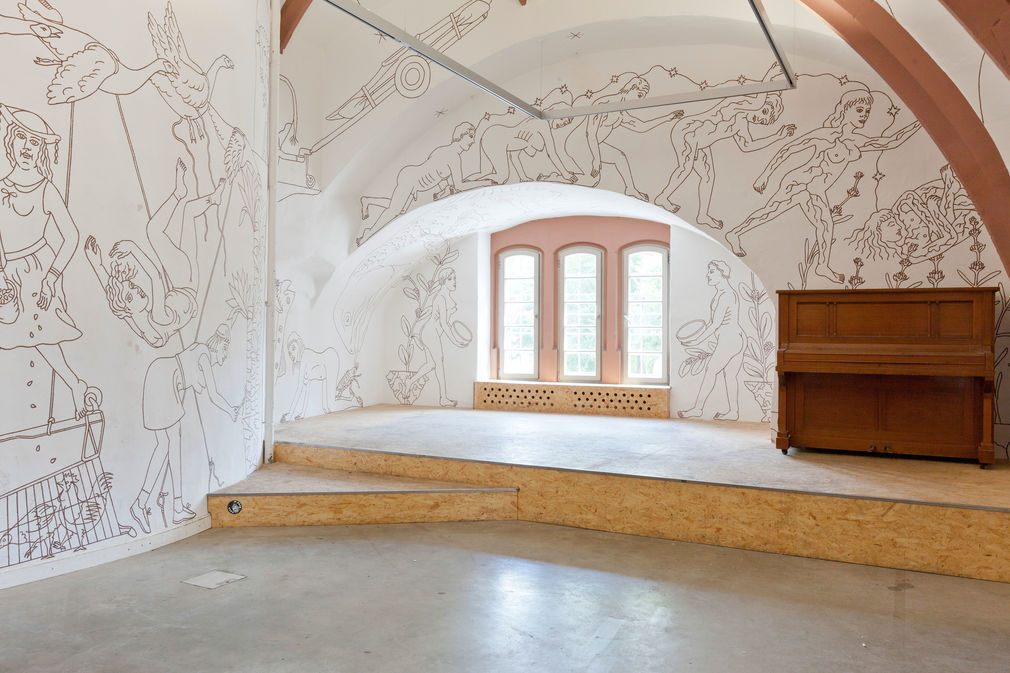 Design of the right-hand chapel, 2014

In the right-hand chapel of Isenburg Palace there is a room which is used as a café and bar that is managed by students. The design by David Schießer features drawings conceived especially for the space that, following the Renaissance idea, cite past epochs as well as depict possible future scenarios. In figurative metaphors Schießer used anthropological developments, examples of coping with everyday life, and analogies, for which he drew on a wide range of fields.

A panoramic line drawing opens out in front of the observer comprising lots of fragmented individual stories, which join up to form a complete narrative. 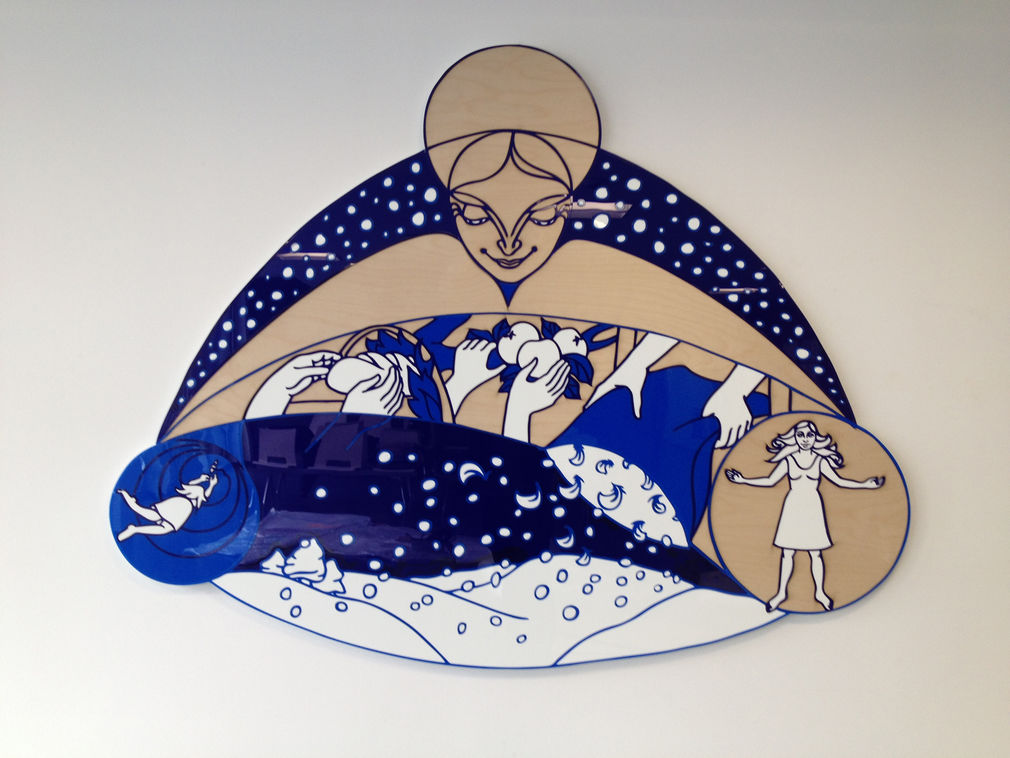 Fairytale motifs were produced for the extension to the Judiciary Center in Hanau, for the most part as laser cuts, some of which the authority purchased. 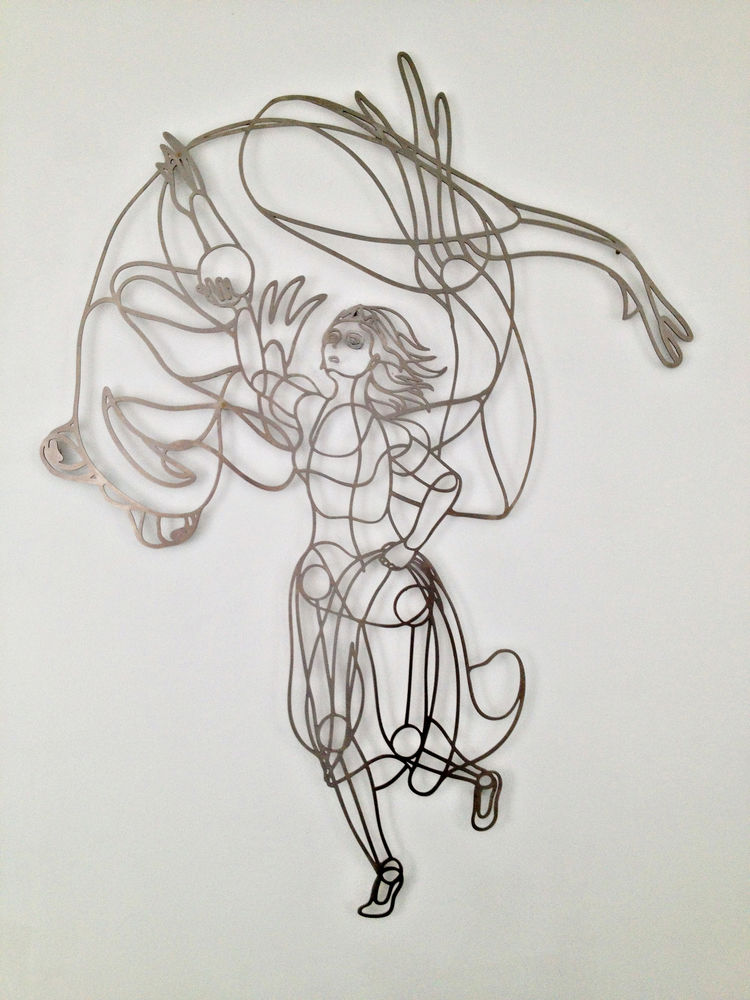 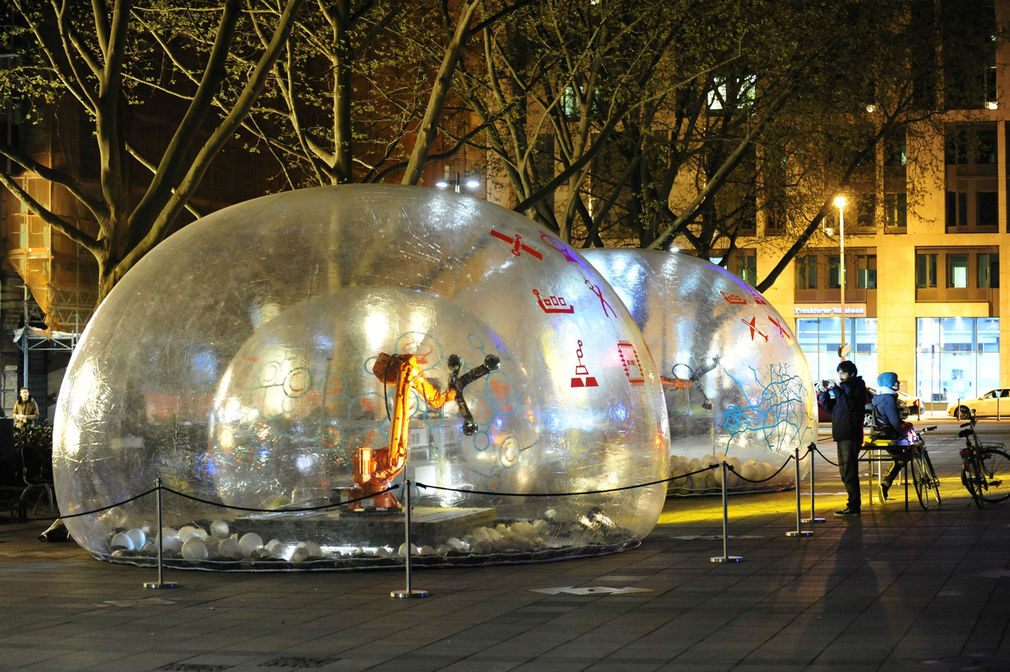 Installation for the opening of Luminale 2012 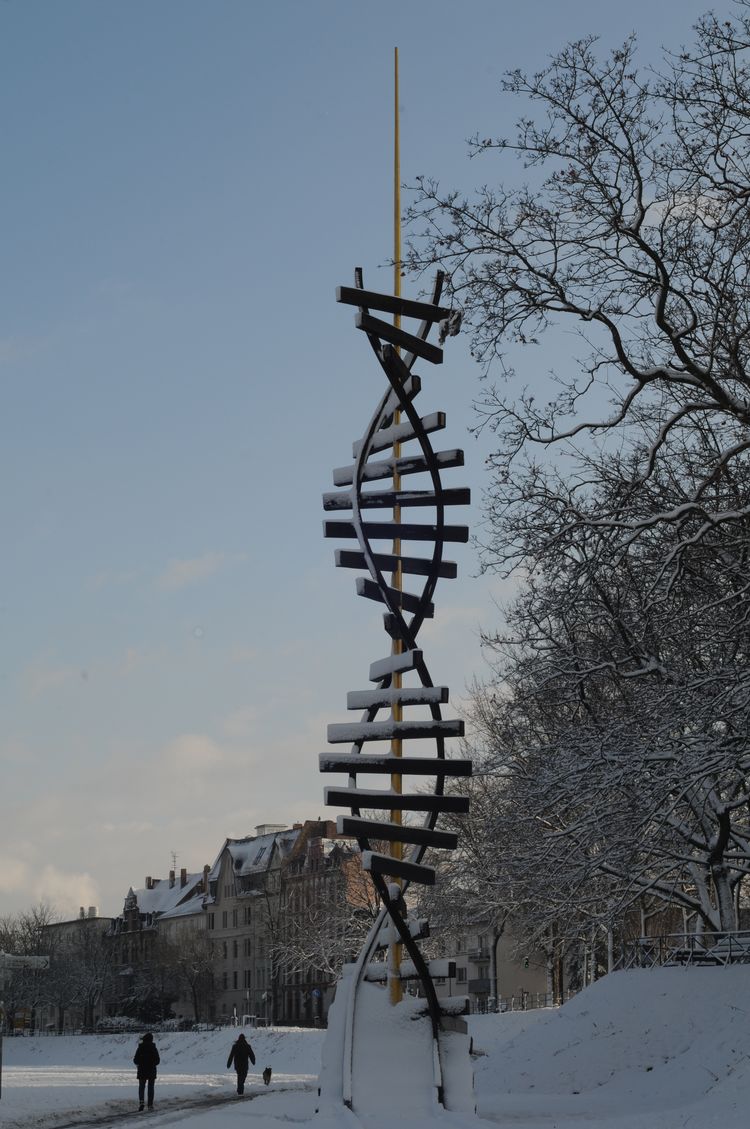 When the tracks of the old dockland railway were removed in 2008, HfG Offenbach students campaigned for an approx. 300-meter stretch near Schlossstrasse to be preserved. And they succeeded in winning over the City of Offenbach to the idea: The Culture Railroad Track on the banks of the River Main is a place where people can meet, where they can strike up a conversation. An inspirational place. At the heart of the idea is an old freight car that serves as a venue for cultural events and political discussions which, hosted by HfG Offenbach students, have been held there several times a week since 2008. In this context Frank Flaskämper, as part of a collaboration process, created a major sculpture, the “Double Helix” which was officially inaugurated on the banks of the Main in 2010. 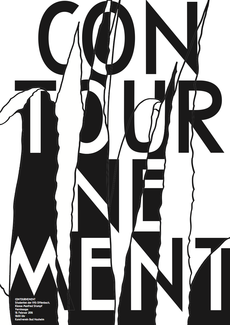 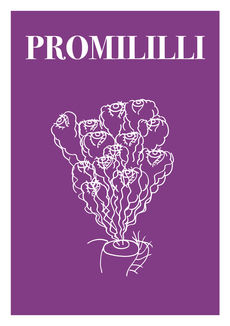