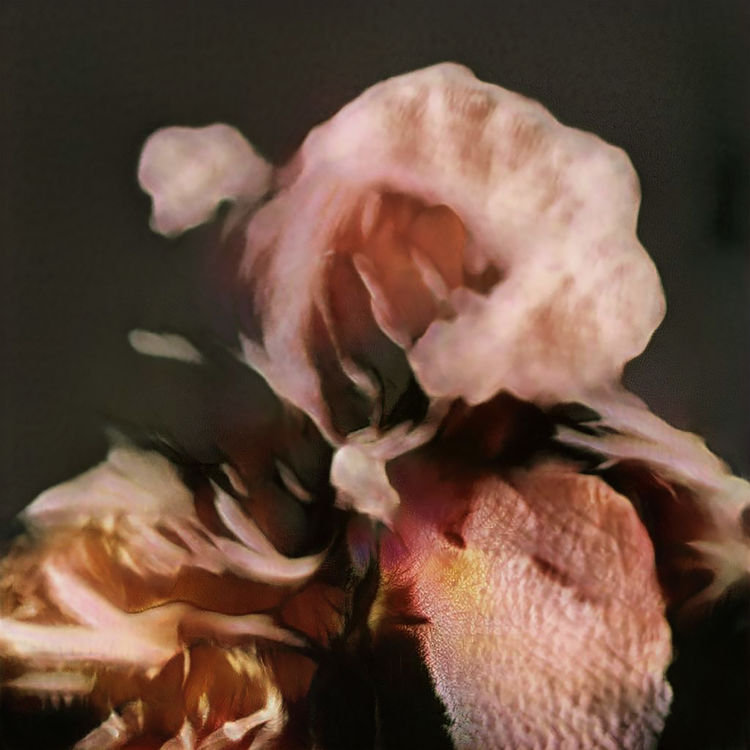 2020 marks the 30th anniversary of the reunification of East and West Germany. After the Second World War, Germany was divided between the allies — with the eastern sector controlled by the Soviet Union. For decades we have seen a steady reveal of untold stories from those living in East Germany, under the dictatorial regime. signs and symbols is pleased to present a group of people walking down a snow covered street, the gallery’s second solo exhibition of Berlin-based artist Ornella Fieres (HfG-graduate). For this exhibition, Fieres presents works based on a collection of over 700 letters, postcards and photographs from the 1960s – 1980s belonging to a woman living in the former GDR in East Berlin. After finding these materials all within one box, Fieres spent several years processing them through various artificial intelligences. This exhibition presents a glimpse into the transformation of a moment into its essence.

In her practice, Fieres explores the unseen relationship between analogue photography, video, sound techniques and digital processes. Her research is inspired by encounters with moments and individuals of the past. Interested in their capabilities for the present, Fieres explores their illusory essence through the digital. She is a storyteller — finding potential in each moment, past and present. She is an artist archivist — preserving and transforming content, time and memory.

The GDR, and its notorious Ministry for State Security (the Stasi), was known for its unprecedented methods of investigation, espionage and infringement on private lives. Information was of the highest value — resulting in a society caged in secrecy and mistrust. Fieres, in conjunction with the neural network frameworks, sifted through the memories and artifacts of one unknown woman — becoming acquainted with her story through these found materials. Unlike the Stasi and their collaborators, Fieres does not reveal her findings about the woman to us. She does not give us the materials to learn or know any particulars. The found data is stored within the neural networks and within Fieres, in her own personal connection to the past and this box of memories.

a group of people walking down a snow covered street presents six works based upon this material. After extensively processing the letters from the collection, Fieres came upon a number of photographs. She saw the woman and her family for the first time. She fed these photographs into a computer vision and pattern recognition framework that described the information it extracted from them. The pieces each consist of an original photograph with the network’s description of its perception of the image underneath. We do not know if the description is a true or false statement about the image. Fieres framed the original photographs within the pieces herself, so that all we see is their versos with their handwritten inscriptions.

The collection had hundreds of postcards of bouquets of flowers, which Fieres fed to a general adversarial network that sublimated the information it received into its own understanding of the image of a flower. Fieres then produced the network’s findings into two photographic works and a hanging curtain displaying the visual essence of the postcards. From behind the curtain we hear an artificial voice, softly speaking in German. Fieres used a neural network specializing in historical documents that attempted to decipher the scrawling and faded handwriting from each of the letters. The sound piece consists of what the intelligence thinks it read — although we as viewers do not know if it is correct or not. The curtain may present imagery gathered from a woman’s personal collection — but the curtain is never drawn back for us. It is only the veil through which we may catch sight of one artist’s impressions of the past